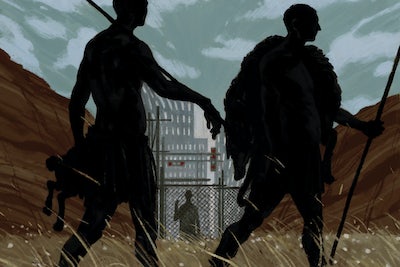 Scott is well aware that much of this story is not entirely new. Big-picture historians such as Jared Diamond have acknowledged that for most people quality of life fell when agriculture replaced hunting and gathering. Yuval Noah Harari’s idiosyncratic, best-selling story-of-everything, Sapiens, describes settled agriculture as “history’s biggest fraud” for the same reasons. Even Adam Smith acknowledged that hunter-gatherers were more egalitarian than settled folk, and saw the state as arising “for the defense of the rich against the poor.” Highlighting the state’s role in ruling-class exploitation is central to the Marxian tradition of writing history, in which ancient slave societies serve as an early example of the extraction of surplus labor.

Part of what makes Scott’s story novel is the central and esteemed place he gives the barbarians. The infrastructure-building, law-codifying, biopolitical states of antiquity are not the starting points of universal history for Scott, as they were for both Marx and liberal historians. They are instead a kind of usurpation of a longer and quite possibly richer human practice of mobility and freedom. Here, too, Scott is echoing strands of a long tradition: The Roman historian Tacitus suggested that German barbarians were more virtuous than settled Romans; Anglo-Americans often traced their democratic identity to the “Anglo-Saxon” liberty of the forest rather than the cities of the Mediterranean; and today both paleo diets and the popularity of the bearded, nomadic wildlings on Game of Thrones suggest a hankering for rude barbarian health and liberty