If you have lived and breathed global capitalism since birth, examining its narrative can feel a bit like a fish analyzing water. But, as Rajan argues, we have to examine it because its flaws and strains are threatening to dry up the entire pond.

It gets tougher every day to deny the human wreckage wrought by capitalism everywhere it exists — the steaming heap of alienation, market failures, inequalities, and rigged outcomes. Proponents of globalization cheer unfettered capitalism as the vehicle for spreading democratic values, freedom, and reciprocal exchange, but in reality, as Rajan notes, entry and participation are not equally open to all. This reality is currently erupting into worldwide unrest and the rise of right-wing populism. Clearly, the official story and what happens on the ground don’t match: Lots of people work hard but get little benefit, while plenty who do not work at all get rich.

via The Sacred Story of Capitalism, Retold – Evonomics

The climate crisis is an existential one, threatening the future of humanity. The best thing one can do for children today is not to buy them a fancy education or top up their trust fund. Rather, it is to drop everything in order to try and slow the climate crisis and adapt societies to the difficulties ahead. So the fourth step you could take is to quit. Because our jobs are not as important as the climate crisis. Key leaders in the movement quit their jobs to join in full-time. Andrew Medhurst, quit his job in the City of London and ended up finance director for Extinction Rebellion. Alison Green quit her job as a Pro Vice Chancellor of a university to join the rebellion. Since then she set up Transition Lab to develop the policies for transformation. Another option is to go part-time, to find more time for the climate cause. Thanks to the flexibility of the University of Cumbria, that is what I did, so I could launch the Deep Adaptation Forum for people to prepare both practically and emotionally for breakdowns in our way of life. It is rapidly becoming a gathering place for people who wish to rebel just enough to help their professions adapt deeply and fairly to the troubles ahead.

Executives in the private, government and charity sectors all face growing frustration at the clear net impotence of our actions on climate change. This ‘stasis anxiety’ will grow as the news on extreme weather and the latest science becomes more worrying. Extinction Rebellion call on “everybody now” to act with urgency. As protests unfold in cities around the world, it is time to consider joining an executive rebellion on climate change.

via Initiative for Leadership and Sustainability: Executive Rebellion – when should we take to the streets on climate? 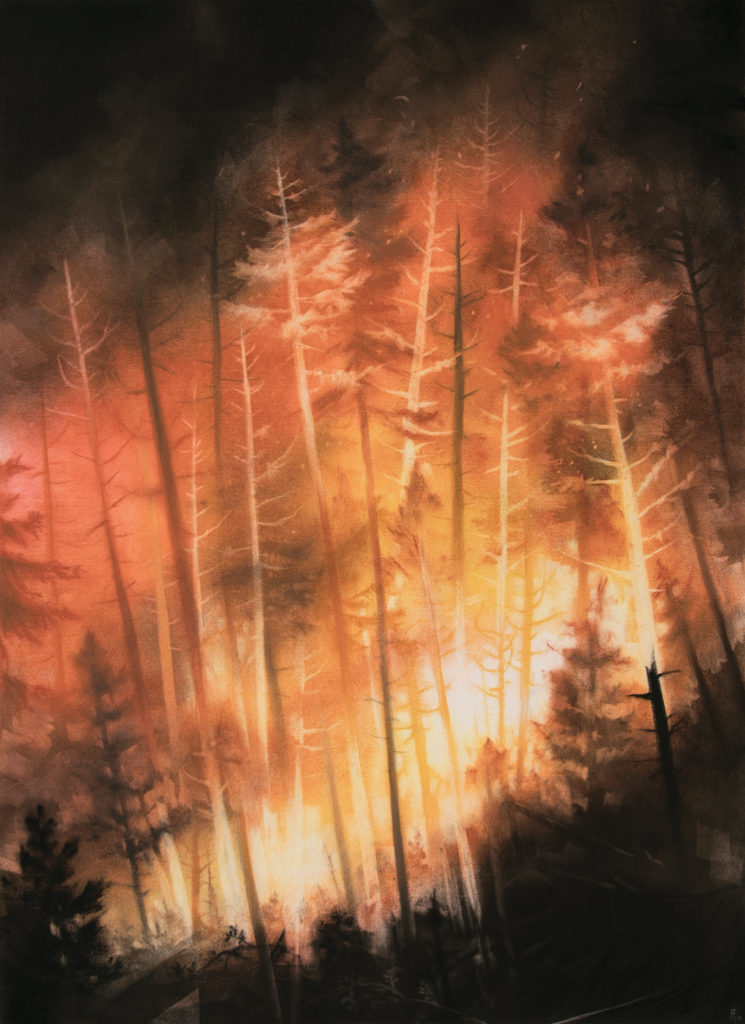 via Guest Column: The Future You Fear is Already Here | The Wild Hunt

via Orion Magazine | Beyond Hope

The stars are just visible. The clear cuts have ended and the forest ahead of you is thick and ancient. It seems to suck in the darkness like a deep breath, exhaling a wind filled with the sweet stink of pine warmed against granite. With every gust, the foliage of the weeping spruce shivers. Pinecones drop like dice. You stare back along the road, barely visible in the darkness—of such strange magnitude that it seems not even to have been built by humans but dropped maybe by some itinerant god who had no use for it. And you can only wonder at that obscure disaster: Did we ever really think we knew where we were going? That there was just this one path to get there?

But what of those birds that lay their eggs on bare earth? When you turn the moon is the color of ice melting into black soil, the horizon limned with it and you know that the cold, blue-fired liquid will sink into the tops of the mountains and into the forest’s many throats, channeled through branches and mycelia and finally into the million warm and ancient hearts sitting deep down in things. You know that the nightjars lay their eggs for love and love only, that without hope there is at least love in the darkness, that gamble against all odds that the eggs not be dashed apart by some passing behemoth.

And you can only cradle your lost cause for love, loving wild and desperate in the face of that determined destitution—loving as one can only love in free plummet to doom and freed maybe at last of doom in the only way possible: through loving. Loving organized. Loving aimed at that horizon, dead reckoning by the stars.

It would be easy to slip into some comfortable framework, to use the discursive archive as Foucault suggested to enforce my thought-forms, to speak truth within the discursive practices that are accepted in academic and scholarly circles of established rules, regulatory thought, etc., except that that would be to reject the very orientation of my being and breakthrough. Why return to a mold that is outworn and useless? What does philosophy or even anti-philosophy offer us today? Nothing. And, I mean just that, a philosophy of nothing. It’s as if philosophy at the end of its tether had realized the ancient Gnostic insight of the kenoma – the vastation, the great emptiness of things, the void of the void, the nihil unbound. And, yet, it comes to this by way of a complex discourse that speaks neither to the common man nor even to the general public, but rather to specialists of philosophical speculation: Continental or Analytical. Experts. Let us be done with experts, with specialists, with the practitioners of arcane thought and speculations that offer us no way out of this dark realm of political and social control and malfeasance.

If life has taught me anything it is that we have to challenge ourselves, break our habitual habits and safety nets of thought and feeling, we have to learn how to learn, break away from the habits that lock us into comfortable paths of acceptance and keep us safely in a cocoon of belief. That’s the difficult thing, breaking free of habits of mind and feeling leaves us vulnerable, open. To risk freedom is to be alone with the alone, to step out of our cocoon and suddenly realize we have nothing to fall back on, not belief system or thought-form to rely on, we are in a universe that is incomplete and open and we are alone in it without support or guide other than others of like kind who share our need to exit this prison world of modernity.

via Exiting the Iron Prison of our Cultural Matrix | Southern Nights